The Hero of the Two Worlds

“Marie-Joseph Paul Yves Roch Gilbert du Motier, Marquis de La Fayette (6 September 1757 – 20 May 1834), known in the United States simply as Lafayette, was a French aristocrat and military officer who fought in the American Revolutionary War, commanding American troops in several battles, including the Siege of Yorktown. After returning to France, he was a key figure in the French Revolution of 1789 and the July Revolution of 1830.”1

Shown in the images below, Lafayette had several different hairstyles throughout his life. His hair was reddish-brown, and his eyes were green. His early portraits show him with a powdered wig (peruke), and later paintings show him with his natural hair. 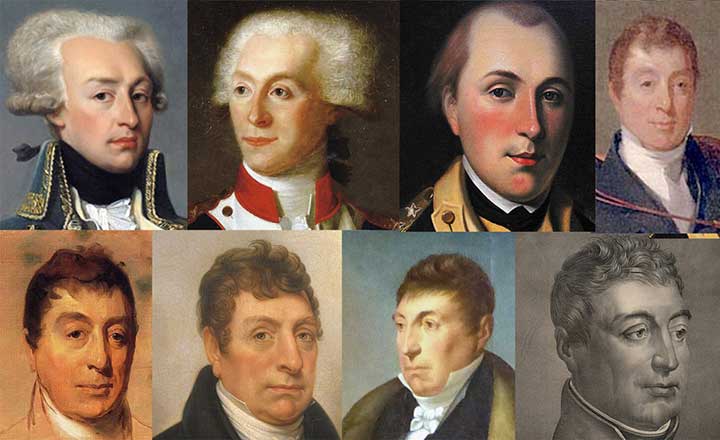 The Photoshop reconstruction of Lafayette’s life mask below shows him with his natural hair. Though he was only 28 at the time, he is sporting a hairstyle similar to that of his later portraits. However, most likely, at this age, he would be sporting a “queue” hairstyle typical of most men of that time. 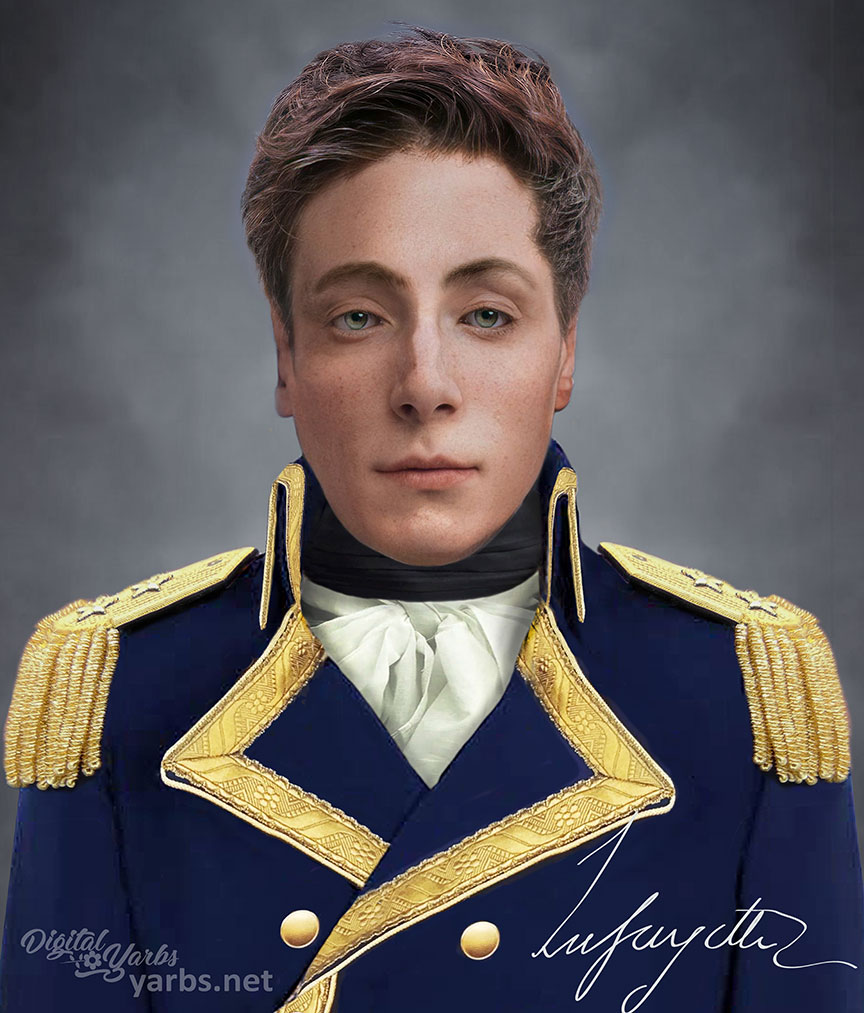 Photoshop reconstruction of the life mask of Marquis de Lafayette

“His mind was early imbued with an ardent love of freedom. It is not known whether his study of English writers who were friendly to civil liberty, or an eager curiosity to learn the merits of the dispute between Great Britain and the American colonies, lead him first thus to take a deep interest in favor of our independence. That controversy excited the attention of statesmen on the continent of Europe as well as in England. It has been said that he was acquainted with some distinguished English characters in 1776, from whom he learnt the situation of America, and the object of our revolution. In the latter part of this year, he applied to SILAS DEANE, our agent then at Paris, for information, and encouragement in his plan, already adopted, of rendering his personal service to the cause of America. While he was at Paris, (Dec. 1776) with these views, Dr. FRANKLIN arrived. The intelligence, received from him respecting our situation and prospects at that period, was of a nature to discourage any one, who had not cherished the most enthusiastic and resolute purpose to engage in our behalf. Our almost desperate condition seems only to have increased his zeal and devotion to the interests of America. “Hitherto, said he, I have only cherished your cause; I now go to serve it personally.” He believed our cause to be just. He considered it the cause of civil liberty; and gloomy as was the prospect, hazardous as was the enterprise, he was determined to support it at the risk of life itself. In his situation, the privations and sacrifices to be made and endured were incalculably great. It is indeed a singular instance of an heroic enterprise for the good of mankind.”2 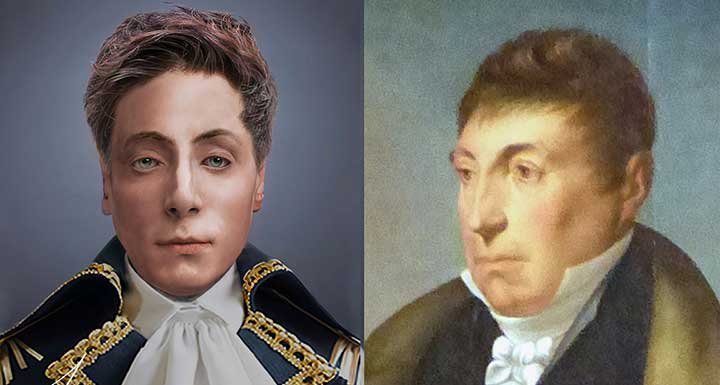 “We cannot more justly describe Lafayette’s sentiments and views, than by quoting his own language used at a subsequent period, in a letter to the President of the Continental Congress—”The moment I heard of America, I loved her; the moment I knew she was fighting for liberty, I burnt with a desire to bleed for her.” The sacrifices he made cannot be so well otherwise estimated as by reflecting that he left an affectionate wife, in whom he was most happy; and who, he was obliged to assure, that he would speedily return, before she would consent to the enterprise.”3

Using the same life mask, Lafayette is shown below with a powdered wig. “For nearly two centuries, powdered wigs—called perukes—were all the rage. By the late 18th century, the trend was dying out. French citizens ousted the peruke during the Revolution, and Brits stopped wearing wigs after William Pitt levied a tax on hair powder in 1795. Short, natural hair became the new craze, and it would stay that way for another two centuries or so.”4 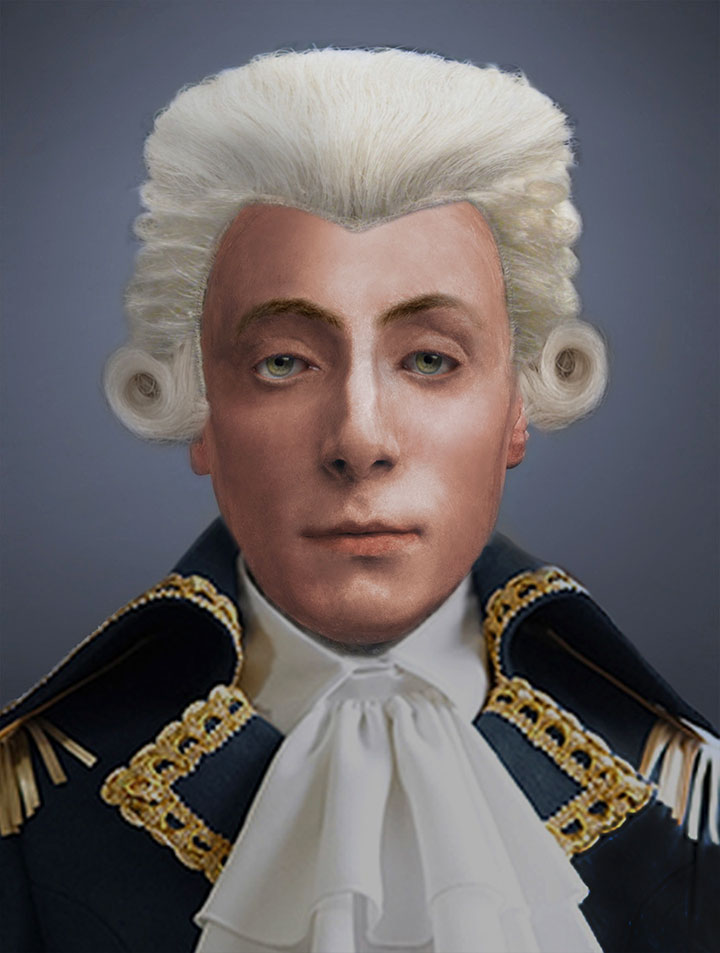 Photoshop reconstruction of the life mask of Marquis de Lafayette with powered wig. 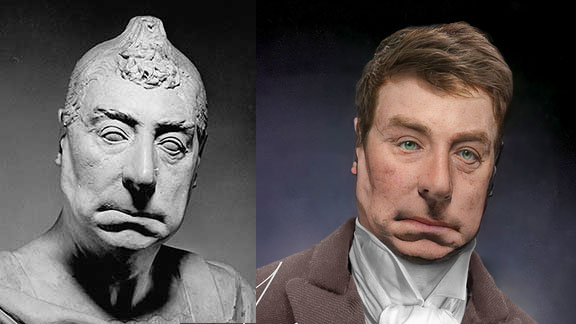