John Quincy Adams said of his photography experience, “The operation is performed in half a minute; but is yet altogether incomprehensible to me.”1 “The shaking of some hundred hands then followed and on my way returning to Mr. Johnson’s, I stopped and four daguerreotype likenesses of my head were taken, two of them jointly with the head of Mr. Bacon — all hideous.”2 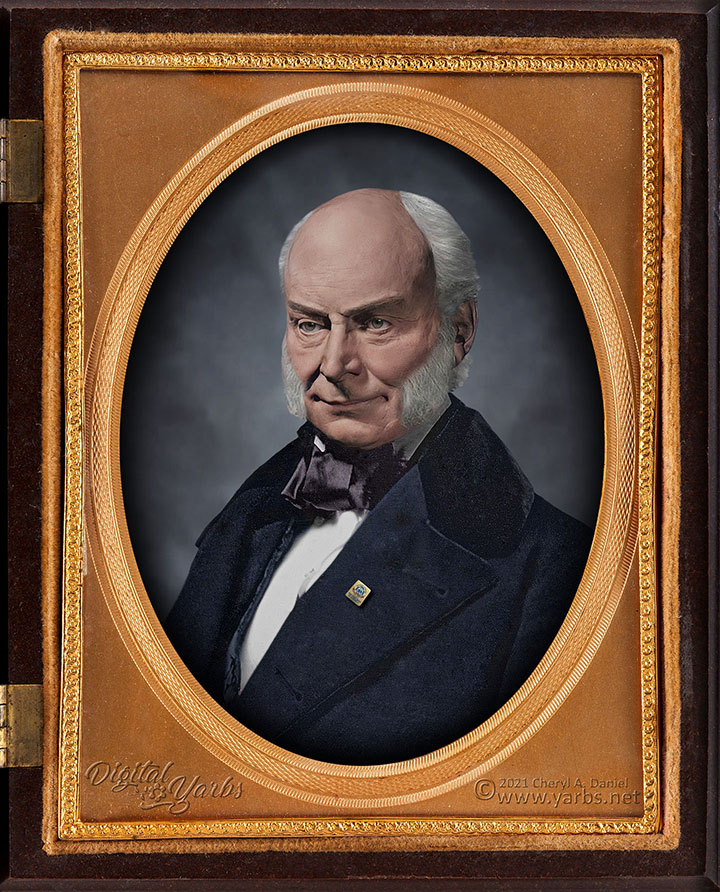 Sketch of the Life of Mr. Adams

By the Honorable John Davis

“JOHN QUINCY ADAMS was born in the then Province of Massachusetts, while she was girding herself for the great Revolutionary struggle which was then before her. His parentage is too well known to need even an allusion; yet I may be pardoned if I say, that his father seemed born to aid in the establishment of our free government, and his mother was a suitable companion and co-laborer of such a patriot. The cradle hymns of the child were the songs of liberty. The power and competence of man for self-government were the topics which he most frequently heard discussed by the wise men of the day, and the inspiration thus caught, gave form and pressure to his afterlife. Thus, early imbued with the love of free institutions, educated by his father for the service of his country, and early led by Washing ton to its altar, he has stood before the world as one of its eminent statesmen. He has occupied, in turn, almost every place of honor which the country could give him, and for more than half a century has been thus identified with its history. Under any circumstances, I should feel myself unequal to the task of rendering justice to his memory; but, with the debilitating effect of bad health still upon me, I can only with extreme brevity touch upon some of the most prominent features of his life.

While yet a young man, he was, in May, 1794, appointed Minister Resident to the States General of the United Netherlands. In May, 1796, two years after, he was appointed Minister Plenipotentiary at Lisbon, in Portugal. These honors were conferred on him by George Washington, with the advice and consent of the Senate.

In May, 1797, he was appointed Minister Plenipotentiary to the King of Prussia. In March, 1798, and probably while at Berlin, he was appointed a Commissioner, with full powers to negotiate a treaty of amity and commerce with Sweden.

After his return to the United States he was elected by the Legislature of Massachusetts a Senator, and discharged the duties of that station in this chamber from the 4th of March, 1803, until June, 1808, when, differing from his colleague and from the State upon a great political question, he resigned his seat. In June, 1809, he was nominated and appointed Minister Plenipotentiary to the Court of St. Petersburg. 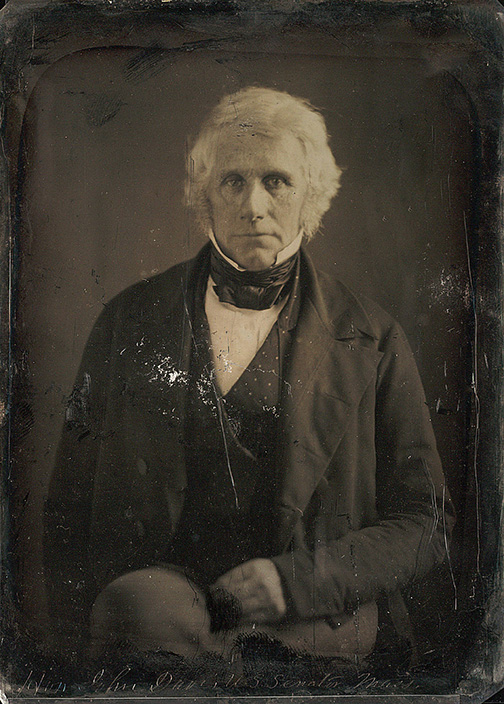 While at that court, in February, 1811, he was appointed an Associate Justice of the Supreme Court of the United States, to fill a vacancy occasioned by the death of Judge Gushing, but never took his seat upon the bench. In May, 1813, he, with Messrs. Gallatin and Bayard, was nominated Envoy Extraordinary and Minister Plenipotentiary to negotiate a treaty of peace with Great Britain, under the mediation of Russia, and a treaty of commerce with Russia. From causes which it is unnecessary to notice, nothing was accomplished under this appointment. But afterward, in January, 1814, he, with Messrs. Gallatin, Bayard, Clay, and Russell, were appointed Ministers Plenipotentiary and Extraordinary to negotiate a treaty of peace, and a treaty of commerce with Great Britain. This mission succeeded in effecting a pacification, and the name of Mr. Adams is subscribed to the treaty of Ghent.

After this eventful crisis in our public affairs, he was, in February, 1815, selected by Mr. Madison to represent the country, and protect its interests, at the Court of St. James; and he remained there as Envoy Extraordinary and Minister Plenipotentiary until Mr. Monroe became President of the United States. On the 5th of March, 1817, at the commencement of the new administration, he was appointed Secretary of State, and continued in the office while that gentleman was at the head of the administration. In 1825, he was elected his successor, and discharged the duties of President for one term, ending on the third of March, 1829.Here followed a brief period of repose from public service, and Mr. Adams retired to his family mansion at Quincy ; but was elected a member of the House of Representatives, from the district in which he lived, at the next election which occurred after his return to it, and took his seat in December, 1831. He retained it, by successive elections, to the day of his death. I have not ventured, on this occasion, beyond a bare enumeration of the high places of trust and confidence which have been conferred upon the deceased. The service covers a period of more than half a century; and what language can I employ which will portray more forcibly the great merits of the deceased, the confidence reposed in him by the public, or the ability with which he discharged the duties devolved upon him, than by this simple narration of recorded facts ? An ambitious man could not desire a more emphatic eulogy.

Mr. Adams, however, was not merely a statesman, but a ripe, accomplished scholar, who, during a life of remarkably well- directed industry, made those great acquirements which adorned his character, and gave to it the manly strength of wisdom and intelligence. As a statesman and patriot, he will rank among the illustrious men of an age prolific in great names, and greatly distinguished for its progress in civilization. The productions of his pen are proofs of a vigorous mind, imbued with a profound knowledge of what it investigates, and of a memory which was singularly retentive and capacious. But his character is not made up of those conspicuous qualities alone. He will be remembered for the virtues of private life for his elevated moral example, for bis integrity, for his devotion to his duties as a Christian, as a neighbor, and as the head of a family. In all these relations, few persons have set a more steadfast or brighter example, and few have descended to the grave where the broken ties of social and domestic affection have been more sincerely lamented. Great as may be the loss to the public of one so gifted and wise, it is by the family that his death will be most deeply felt. His aged and beloved partner, who has so long shared the honors of his career, and to whom all who know her are bound by the ties of friendship will believe that we share her grief, mourn her bereavement and sympathize with her in her affliction.

It is believed to have been the earnest wish of his heart to die, like Chatham, in the midst of his labors. It was a sublime thought, that where he had toiled in the house of the nation, in hours of the day devoted to its service, the stroke of death should reach him. and there sever the lies of love and patriot ism which bound him to earth. He fell in his seat, attacked by paralysis, of which he had before been a subject. To describe the scene which ensued would be impossible. It was more than the spontaneous gush of feeling which all such events call forth, BO much to the honor of our nature. It was the expression of reverence for his moral worth, of admiration for his great intellectual endowments, and of veneration for his age and public services. All gathered round the sufferer, and the strong sympathy and deep feeling which were manifested, showed that the business of the House (which was instantly adjourned) was for gotten amid the distressing anxieties of the moment. He was soon removed to the apartment of the Speaker, where he remained, surrounded by afflicted friends, till the weary clay resigned its immortal spirit. “This is the end of earth!” Brief but emphatic words. They were among the last uttered by the dying Christian.

Thus, has closed the life of one whose purity, patriotism, talents, and learning, have seldom been seriously questioned. To say that he had faults, would only be declaring that he was human. Let him who is exempt from error, venture to point them out. In this long career of public life, it would be strange if the venerable man had not met with many who have differed from him in sentiment, or who have condemned his acts. If there be such, let the mantle of oblivion be thrown over each unkind thought. Let not the grave of the “ old man eloquent” be desecrated by unfriendly remembrances, but let us yield our homage to his many virtues, and let it be our prayer that we may so perform our duties here, that, if summoned in a like sudden and appalling manner, we may not be found unprepared or unable to utter his words, ‘ I am composed.'”3 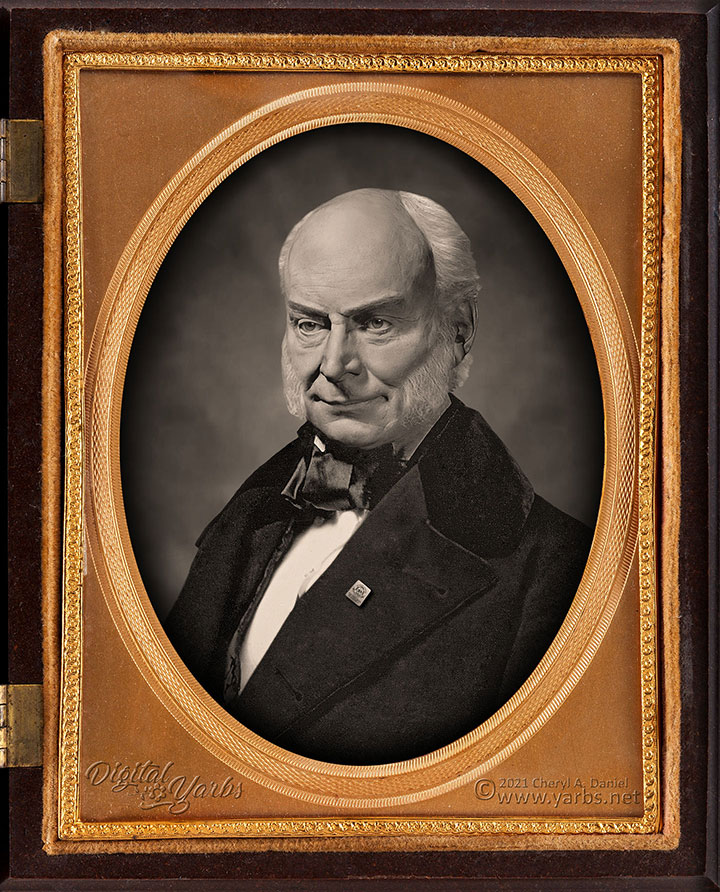 Black and white daguerreotype of the reconstructed life mask of John Quincy Adams.

Hark! ‘Tis the holy temple’s bell;
The voice that summons me to prayer:
My heart, each roving fancy quell;
Come, to the house of God repair.
There, while, in orison sublime,
Souls to the throne of God ascend,
Let no unhallowed child of time
Profane pollutions with them blend.
How for thy wants canst thou implore,
Crave for thy frailties pardon free,
Of praise the votive tribute pour,
Or bend, in thanks, the grateful knee,
If, from the awful King of kings,
Each bauble lures thy soul astray;
If to this dust of earth it clings,
And, fickle, flies from heaven away;
Pure as the blessed seraph’s vow,
O, let the sacred concert rise;
Intent with humble rapture bow,
Adore the ruler of the skies.
Bid earth-born atoms all depart;
Within thyself collected, fall;
And give one day, rebellious heart,
Unsullied to the Lord of all.4

Before and after life mask reconstruction of John Quincy Adams.