In an era with no photography and so many variations among paintings, we are left scratching our heads. Now we can know. Using Adobe Photoshop, I’ve attempted to faithfully reproduce 3rd U.S. President Thomas Jefferson as he might have looked in 1825 using his life mask. We can now see what Jefferson looked like, although no photographs of him exist.

The life mask of Thomas Jefferson was taken from a plaster mold of his head created by John Henri Isaac Browere.

“On October 15, 1825, there appeared at Monticello, the home of the venerable Thomas Jefferson, one John Henri Isaac Browere, sculptor and celebrity hunter. He had come, he announced, to make a likeness of Mr. Jefferson. Browere had already gained some degree of fame for his busts of well-known people. Not carved from wood or chiselled from marble, these busts were cast of plaster, in the European manner, from molds taken of the features of living subjects. He made the molds with a grout whose formula he himself had concocted and which he jealously guarded.”1 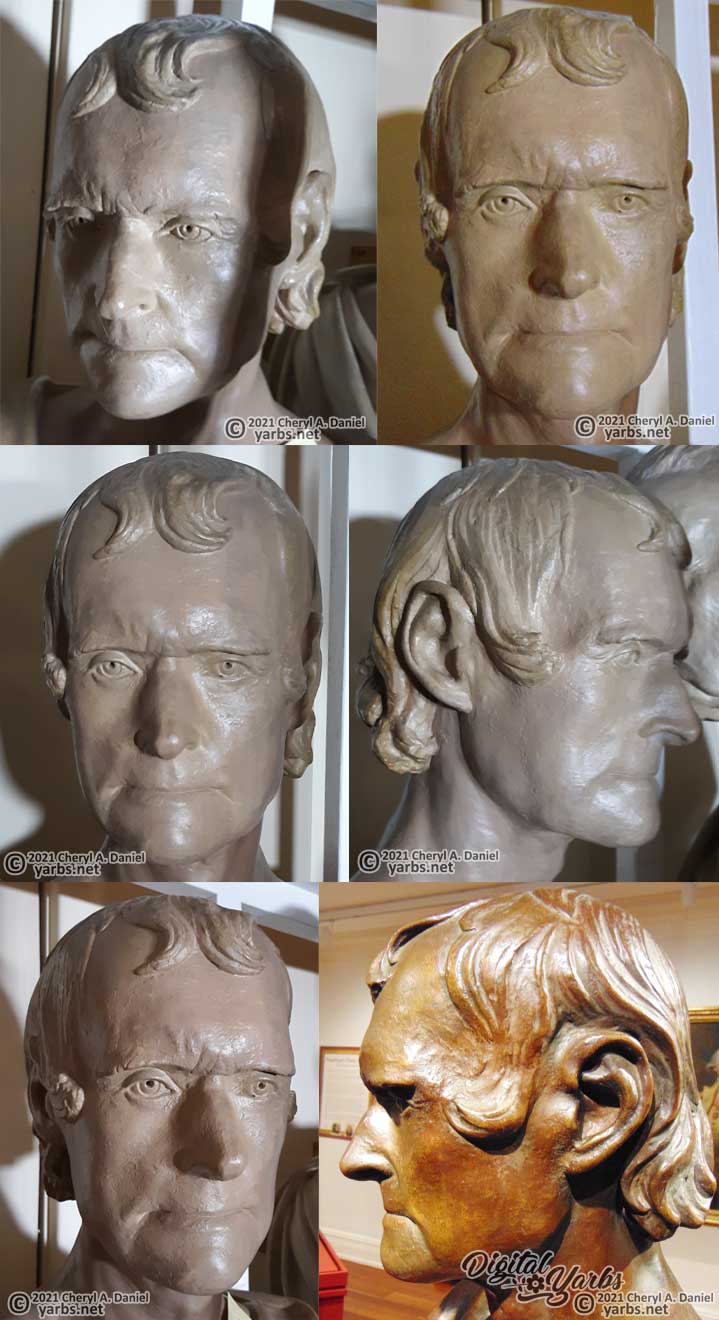 “According to David Meschutt's "A Bold Experiment: John Henri Isaac Browere's Life Masks of Prominent Americans","In preparing his subjects, Browere oiled the skin, eyebrows and hair, and put straws in the nostrils to facilitate breathing. He then warmed his mixture in order to make it more pliable and applied it in several light layers to the face and, in some cases, to the neck, shoulders, and chest of the subject. He allowed about twenty minutes for the plaster to set. When he removed the hardened plaster, he had a negative mold; by pouring plaster into the mold, he produced a positive cast of the subject's head. He then applied the mask to an armature and molded the torso in plaster. He refined the mask by by modeling open eyes and hair, but did not otherwise alter its appearance. The result was a startlingly realistic likeness, in no way idealized.

The substance which Browere applied to his sitter's face was his own invention. Earlier sculptors had used plaster of Paris but that is heavy material and can distort the shape of the face. Browere experimented with different mixtures of plaster until he finally produced a light weight substance. The exact composition of the medium was a closely-guarded secret which Browere passed along only to his son Albertus and which Albertus transmitted to no one."

Due to the lightness of Browere's plaster mixture the faces were not distorted and were considered very accurate likenesses. Jefferson endorsed his life mask bust, as did James and Dolley Madison when they saw it several days later. James Madison said of his own life mask, "Per request of Mr. Browere, busts of myself and of my wife, regarded as exact likenesses, have been executed by him in plaister, being casts made from the moulds formed on our persons, of which this certificate is given under my hand at Montpelier, 19, October, 1825."

An Accurate Likeness of Jefferson

According to Thomas Jefferson’s great-granddaughter Sarah N. Randolph, the portrait below made from a painting by Gilbert Stuart is considered the best likeness of Jefferson. I chose this portrait as a base for the life mask reconstruction of Jefferson.5

Below is the Photoshop reconstruction of Jefferson’s life mask.

Remarkably, Jefferson showed little wrinkles for his advanced age in 1825.

“There seems to be no consensus on Thomas Jefferson’s eye color. His eyes were variously described by family, friends, employees, and others as blue, gray, “light,” hazel, and combinations thereof.”3

I studied a few of Jefferson’s paintings when attempting to place his eyebrows. Some paintings show his eyebrows to be dark even into old age. I tried to shape his brows according to the contours of the mask, taking into account that the plaster may have pressed his eyebrows a bit. 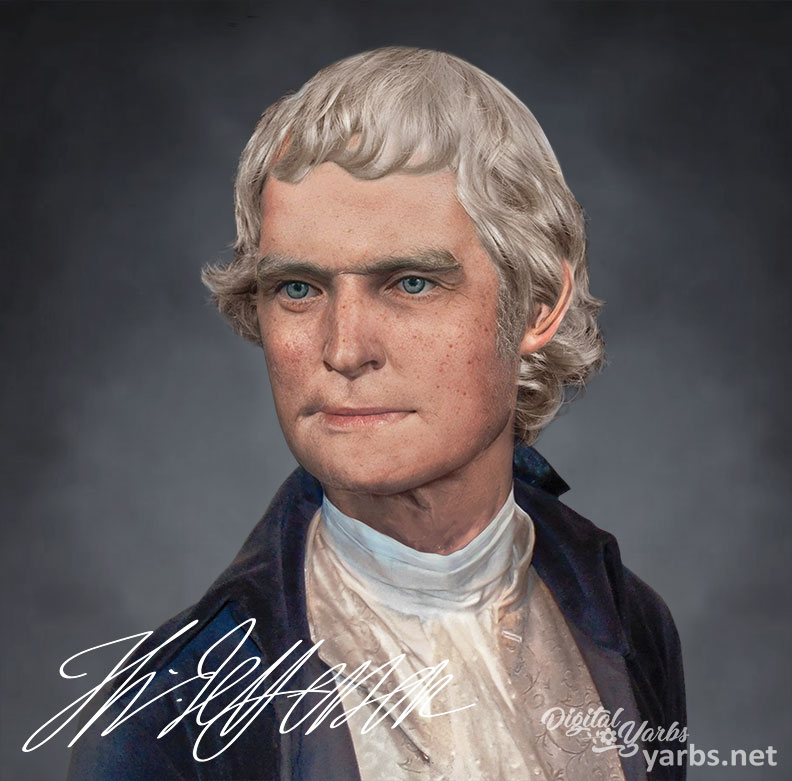 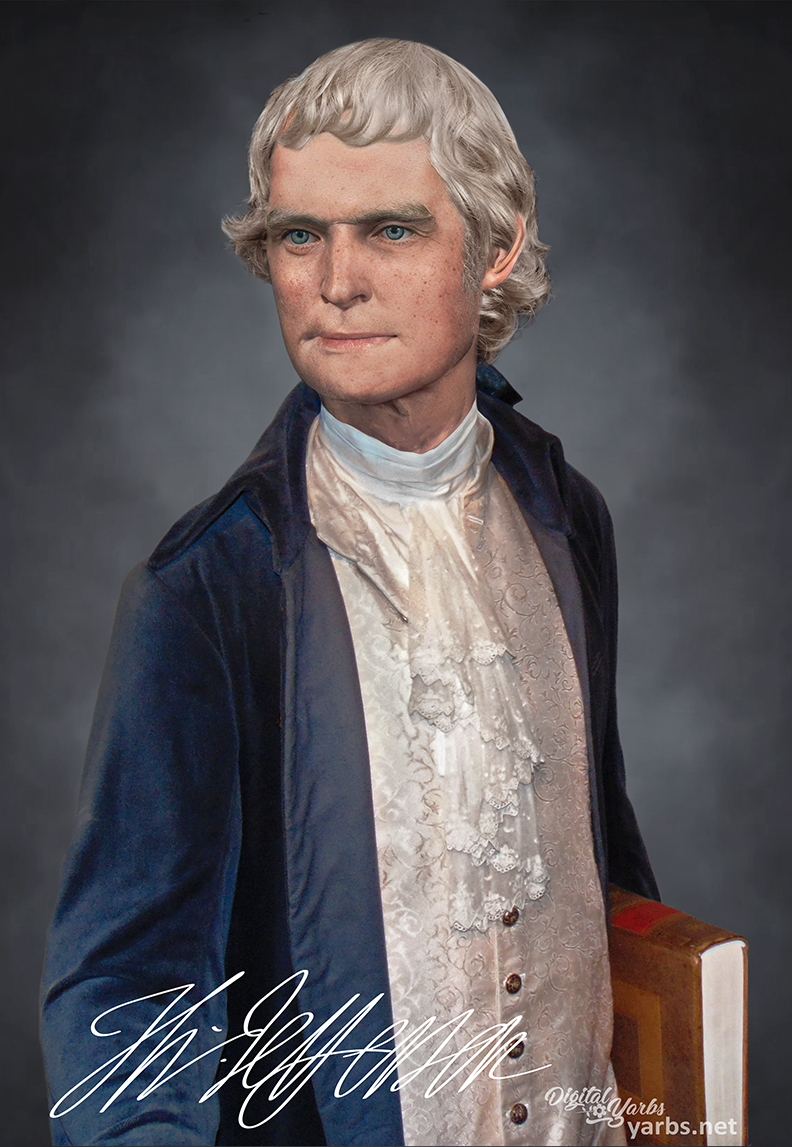 The casting of Jefferson’s life mask did not go well; he almost suffocated as a result.

″Jefferson wrote to James Madison of the ordeal on October 18, 1825: I was taken in by Browere. he said his operation would be of about 20. minutes and less unpleasant than Houdon’s method. I submitted therefore without enquiry but it was a bold experiment on his part on the health of an Octogenary, worn down by sickness as well as age. successive coats of thin grout plaistered on the naked head, and kept there an hour, would have been a severe trial of a young and hale person. he suffered the plaister also to get so dry that separation became difficult & even dangerous. he was obliged to use freely the mallet & chisel to break it into pieces and get off a piece at a time. these thumps of the mallet would have been sensible almost to a loggerhead. the family became alarmed, and he confused, till I was quite exhausted, and there became real danger that the ears would separate from the head sooner than from the plaister. I now bid adieu for ever to busts & even portraits.”4 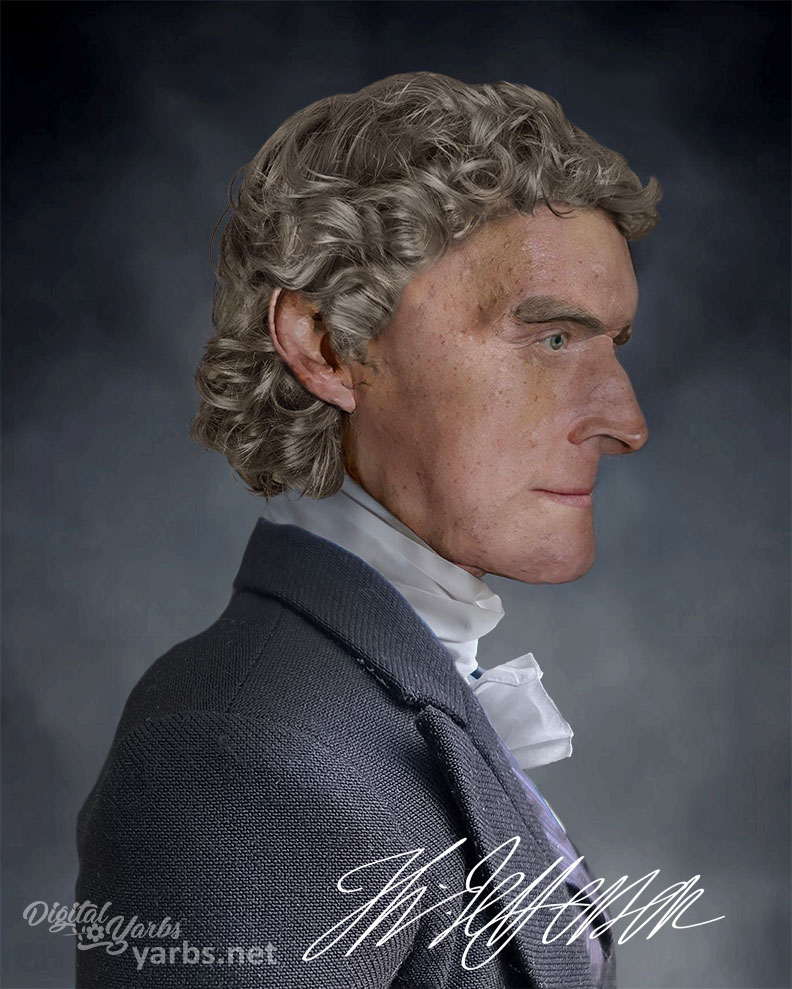 A profile view of the reconstructed life mask of Thomas Jefferson. 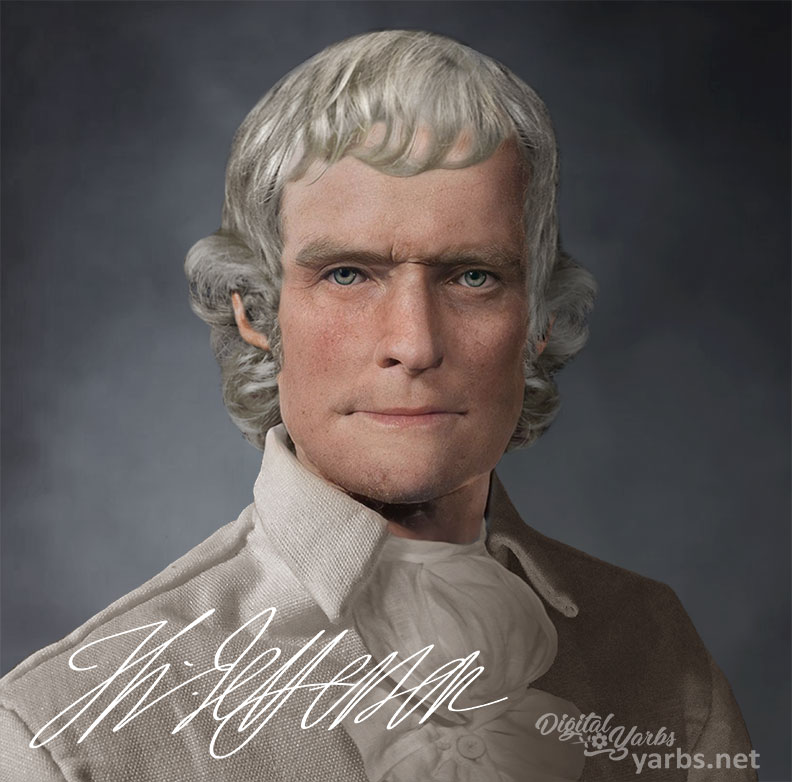 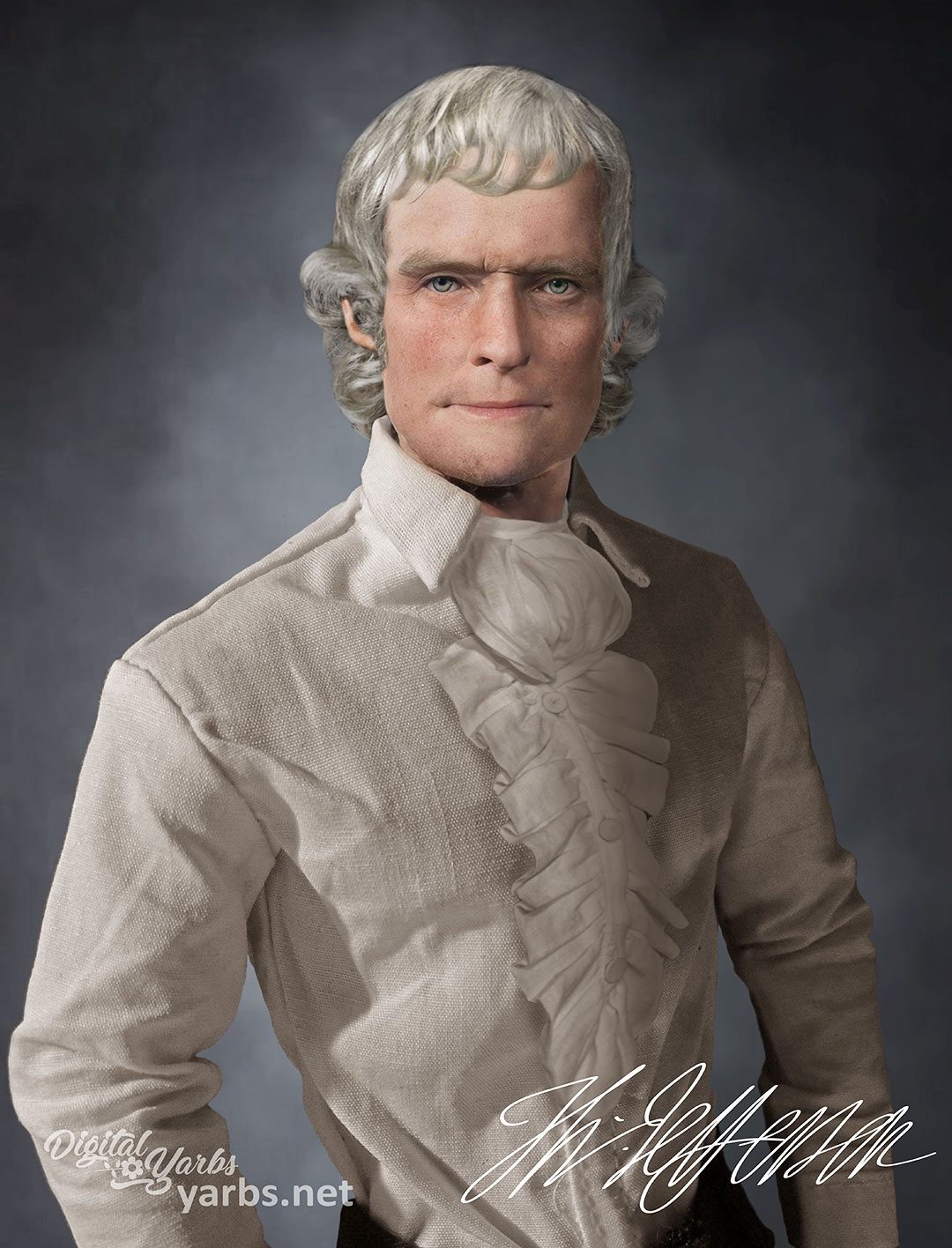